Last month, Solaris Vail was honored to serve as headquarters to the 2015 FIS Alpine World Ski Championships, which saw record-breaking attendance. According to 2015 FIS Alpine World Ski Championships Organizing Committee President Ceil Folz, Vail Valley hosted more than 200,000 fans throughout the two-week event. In case you missed it, we’ve compiled several of the highlights below.

Solaris Plaza was converted into “Champions Plaza” to host the opening event, as well as several other nightly festivities, including concerts and fireworks shows. Keeping with the Championships’ theme, the Opening Ceremony was divided into three segments: Dream It, Live It and Share It. The packed plaza enjoyed a parade of the participating nations, and Vail-native Sarah Schleper garnered wild applause from the crowd. 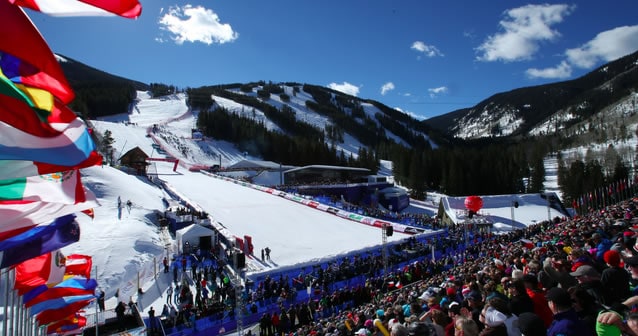 Another Vail-native and fan favorite, Vonn earned bronze in the speed race, even after a second knee surgery. She also placed 14th in the giant slalom.

Eagle-Vail’s own Mikaela Shiffrin became the third woman to win back-to-back slalom titles at the World Championships with her performance on February 14. The 19-year-old athlete previously won gold at the Sochi Olympics, and has remained a hometown hero.

Champions Plaza Lights up the Night

Solaris Plaza saw large crowds for a variety of free concerts, including Michael Franti and Spearhead, O.A.R, American Authors and Barenaked Ladies. The performances kept energy and excitement up in Vail Village.

We’d like to thank all of the countless staff members, volunteers and visitors who contributed to making the 2015 FIS Alpine World Ski Championships a safe, fun and memorable event for Vail Valley.